We have all been waiting for the opening of “The Landing” with great anticipation.  Indeed we have now received invitations for group tastings in the near future.  So we thought folks might be interested in seeing how our chefs are developing the recipes and learning the techniques to ensure the food is mouthwatering.

Disclaimer:  The videography standard is not nearly up to the demonstrated cooking standard.  This is my first venture into videography and we can all blame Richard Zorza for the loan of his video cam and the accompanying lessons he gave me.

Collington residents would not be alone if they were confused by the “what goes where when” problem.

So, thanks to the Sustainability Committee and their creation of this simple two page brochure of which one page is shown below, and the full printable version is here. 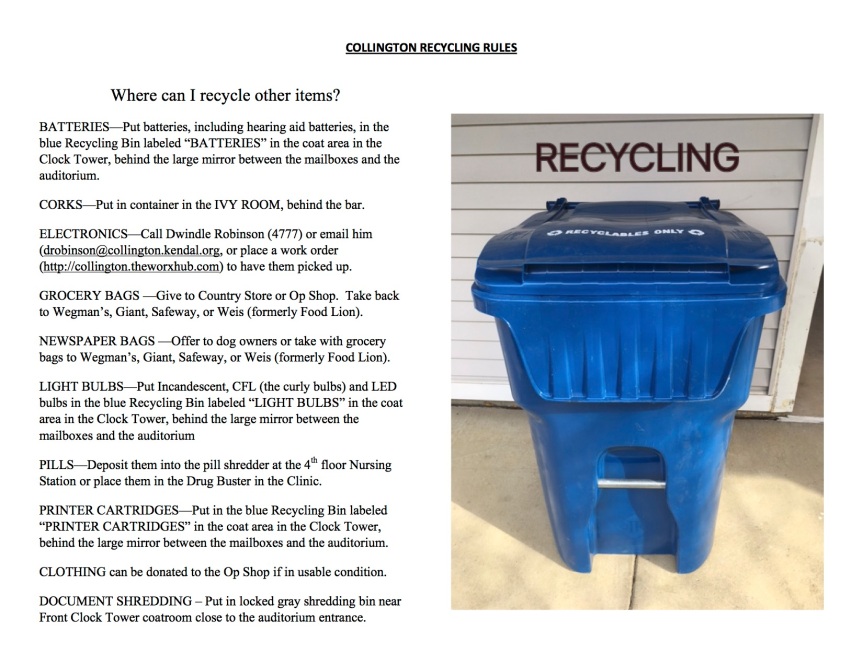 The brochure is the work of several Sustainability Group Members including Sara Case, Pat Bozeman, Jessica Millstead, Marian Fuchs, Peter Pfund, Jim Giese,and Charlotte Melichar, plus Joan Zorza of the Marketing Committee. It will also be printed and distributed to all independent residents with extra copies to Marketing for incoming residents.

In this community there is no need to underline the importance of following the instructions.

Starting Saturday, a large stretch of the Blue, Orange and Silver lines from DC to Collington will be shut for 16 days.

The details are here as described in the Post:

For people who have no choice but to use the subway, Metro will provide shuttle buses to ferry them past the Stadium-Armory and Potomac Avenue stations, which will be shuttered for 16 days. However, there will not be nearly enough buses to carry the tens of thousands of rail commuters who normally ride in that area, transit officials warned.

“They should allow well over an hour of additional travel time,” Metro spokesman Dan Stessel said of shuttle bus riders. “Expect crowding. Expect it to be hot. Expect it to be frustrating. It’s not going to be a pleasant experience.”

For most of us residents, we have alternatives.  The staff, not so much so.  So, lets be considerate and appreciative of the efforts many are having to make to get here to take care of us.  And, that’s not even to think of the traffic.

Here is the Post’s article of Prince George’s County plans.

Plans include deploying more buses to depart every 20 minutes from New Carrollton to Greenbelt, offering free service on the county’s TheBus route 15X, which connects the two stations, and placing additional buses on stand-by to support Metro’s shuttle buses. New Carrollton is the eastern endpoint of the Orange Line, while Greenbelt is the northern terminus for the Green and Yellow lines.

Thanks to Pat Johns for pointing this article need.

Clocktower parking lot is open, and they will be working on the cluster and apartment lots today.

Housekeeping should be providing services today.

No shuttles to metro or shopping today.

Here, from yesterday, is the Oppportunites Outlet Shop hard at work in the snow.

UPDATE: Dining room is to be open, buffet only. 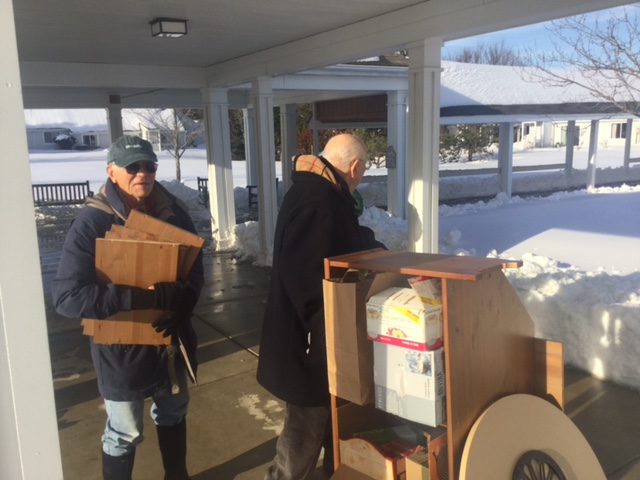