Fifty-four people attended this year’s Seder ceremony – on the same day as Good Friday.  As in previous years, there were more non-Jews than Jews who listened and spoke the words of the Haggadah, telling the story of the escape of the Jewish people from slavery in Egypt, across the desert to their homeland.  As in previous years, the story has been revised to make it relevant to life today, and to acknowledge its role as a spring festival, welcoming new life after winter.

The Seder was led by Mitchell Naimark, who is the husband of Barbara Naimark, who is in charge of medical records at Collington.   The first half of the occasion involved an explanation of the various symbolic foods in front of each diner – and to celebrating the ‘fruit of the vine’ with either red wine or grape juice.

The main meal was delicious:  matzo ball soup, followed by salmon or brisket served with potato pancakes and asparagus, and followed by generous scoops of raspberry sorbet. 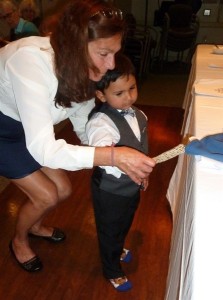 Towards the end of the seder, there is a role for the youngest person present.   This turned out to be a well-dressed little boy who is the grandson of Evelyn Westebbe, a patient in the Creighton Center.  His job is to find some ‘hidden’ matzos, which he did, with the help of his mother.

Special thanks to Stephanie Tolson, Lydia, Taimi Ando, and Chris Ramsey who did a fabulous job cooking scrumptious food, serving it, and quietly cleaning up. Thanks also to Priscilla Lindenauer, Frances Nebesky, Donna Gould, Resa Jascourt and Joan Zorza for planning and organizing the event and putting together the new Haggadah, and to Ana Amaya for coordinating the meal and service with them.