Someone recently asked if there was a Collington Olympian.  Turns out that there was one, of whom we can be proud in so many ways that go beyond and enhance the sport achievement itself.

As George Newman’s article in the February 2015 Collingtonian began:

The 1936 Berlin Olympics are justly famous for the four gold medals won by Jesse Owens, the African-American sprinter whose performance gave the lie to Adolf Hitler’s theory of a Nordic master race. But Owens was not the only African-American to win a medal in Berlin. As Collington celebrates Black History Month, it’s fitting to note that one of Owens’s team- mates, Frederick Douglass Pollard Jr., spent the last years of his life in our Creighton Center.

Pollard, who was known as Fritz, was fully Owens’s equal, said Pollard’s son, Fritz Pollard III, who lives in Germantown, Md., “My father said he used to beat Jesse in the 100 [meter sprint] but he thought the 100 was boring,” the son said in an interview. “He really liked the hurdles.”

Indeed, his history is recalled in a NYT article about a medalists Reunion in 1999.

They gathered on the steps of the Capitol, more than 100 American Olympians — from Fred Pollard, who has spent a lifetime describing how it felt to be a black man confronting Adolf Hitler at Berlin’s 1936 Games, to Beth Botsford, a 16-year-old double gold medal winner in 1996 who was late for today’s Olympic Day festivities because she would not miss her morning swim practice.

In the early afternoon, Pollard told Jesse Owens stories and Conner explained how he first got interested in the Olympics with an eighth-grade term paper on the 1936 Games. Botsford acknowledged it was humbling to be a part of such a group.

Here is the photo of Frederick Douglass Pollard Jr.  We honor him.  He earned his name. 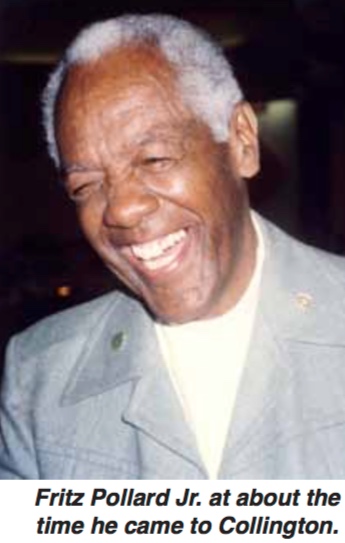 By the way, his father was the first African American head coach in the NFL.