We moved into a big 1904 house in Webster Groves, Missouri in 1976. Alma Paulsmeyer, a good friend of Carol’s mother, said she had a swing that might go on the large screened porch across the front of the house. Alma was a widow. Her husband had been bedridden with Parkinson’s for many years and now she lived in a small house. She did seamstress work to supplement a small pension. The swing was in the basement. Her husband had been a salesman in Illinois. He had the swing made in a cabinet shop for her birthday in 1930.

The swing hung on our porch for 26 years. Two director’s chairs and the swing were our summer living room where we chatted with people who dropped by, watched the softball games at the field across the street, or just felt the evening cool. The attached photo is of us with our two sons Greg and Ben in 1977.

When we sold the house preparing to retire, the swing went into storage in garages, basements, and finally the shed at the Cape Cod house we retired to for 10 years before we came to Collington. We kept hoping one of our sons, or maybe Carol’s niece would get a house with a place for the swing, but it never happened. So, when we moved to Collington in October 2015, the swing came with us. It was in the wood shop over the winter getting a new finish. In the spring we hung it in the pavilion. When we sit in it there now, it seems in the right place. 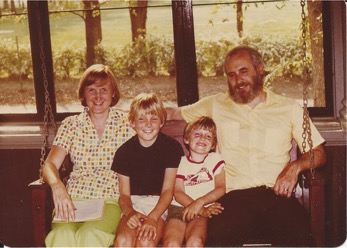